It was the fourth fire to come through in a  month. The fourth time we nosed the smoke, felt the alert begin to tingle in some back part of the brain. The part that’s always on, like a radio station in the background. It’s telling you what to get together, just in case, while you carry on doing what you had been doing (feeding dogs, meeting deadlines) for the time being.

And after so many ‘just in cases’ already this month the radio station was turned down low. The bag with the crucial documents, the cat box, the dog’s leashes. My manuscript’s printed rough drafts one and two. The small red shoebox that my dad kept all these years, the one that says ‘Shufflers’ and came home for the first time bearing a pair of sandals I can still vaguely picture on my own four-year-old feet; it now holds many smaller boxes of slides he took with his Rolleiflex, looking down into that magic box while he was really looking at me.

These and all the other things you would rather not live without (although you know that you could, if it came to that) had been taken out and put back three times already this month. Just in case.

So this time, when the smoke began prickling the inside of my nostrils I kind of ignored it. Even thought the wind was pumping a vicious, malicious, mean spirited gale, and coming from the south east.

I live on the southeast corner of Kommetjie, a small coastal village on the south western side of the Cape Peninsula. It’s the wild edge of the village, the side that abuts koppies rather than dunes, where the coastal fynbos shelters tortoises and cobras, field mice and long grey mongooses. There are caracal and camels (although those are not indigenous – there are a holy three that graze here sometimes when they are not taking tourists around on Bedouin carpet saddles at Imhoff farm). The baboons prefer the rocky outcrops and easy-access dustbins on Kommetjie’s western edge, but last year we had to chase a puffadder out of our compost heap. 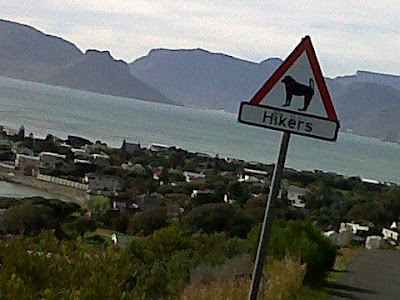 There is a stand of gumtrees in the camel field which are not indigenous either, and highly combustible. Every time a fire comes through — and it is always during a southeaster, and always from the southeast — we gather, neighbours in this small cul-de-sac which only has four houses, and watch the gumtrees and wonder if this time, they are going to go. The standing joke, as we gather in nightgowns with morning cups of tea at the wire fence that separates the end of the cul-de-sac from the field, is that we should stop meeting like this.

And then the fires pass by, beaten by valiant firefighters into the the mountains to the south, and the bags and the boxes and the documents and leashes and the external harddrives would be put back in the cupboards and life would carry on.

But not this time…

I spent last week in hospital hooked up to a potent corticosteroid drip to treat a condition I had almost forgotten I had, after seven years in remission. High doses of Solumedrol make you feel like a mustang on tik. Which is particularly disconcerting if you can’t feel anything from your chest down. Plus it has been known to induce psychosis. I like to call mine mania, my partner would probably favour the stronger term. Kind friends who visited in hospital told me I just talked faster, which they hadn’t thought possible. I can’t remember a lot of what I said. (Perhaps this is where I should apologise if I gave any offense to anyone?)

But the drug does work. After almost a week back home I was walking without having to hold on to things, and could feel my fingers and hands enough to type my book column and, when the fire came in, to help pack up the car.

Only I didn’t really help, because I couldn’t remember what I was supposed to take. After all the practice runs, all I could do was put the bags that were already packed ‘just-in-case’ on the kitchen table. I did remember my laptop, because I was using that, and my camera (ditto – my hands were good to work that too, especially on motor-drive), and the books that I was reviewing for my deadline. (Douglas Coupland’s Player One, Earl Lovelace’s Is Just a Movie, Neil Jordan’s Mistaken, Emma Forrest’s Your Voice in My Head, and Fiona McIntosh’s Slackpacking, which I am going to do a lot more of when I get my strength, if not my entire mind, back. The reviews will be in Psychologies Magazine‘s South African April/May 2011 issue.)

Living in the moment

It seemed, it seems, that I could or can only concentrate on what I am doing right now, and have lost the ability to plan forward or, for that matter, think back. Perhaps that is a normal side effect of having too much adrenaline running around your system.  (Rest, they tell you in the hospital, while they pump you full of the stuff. Rest, the tell you when you get home, then test you with a fire through your village.) It’s like being in a permanent state of fight or flight, after someone tampered with the brakes.

So I forgot my passport, and a whole lot of other things. But remembered all things living, the dogs and the cats and David, who indulged me, as he does in so many things, by returning for the passport, by which time we couldn’t tell through the smoke if the house was still there.

Strange daze indeed.
(to be continued…)

Every morning my fence is a new work of art #dream

Left us four years ago today. Forever in my heart.

Haven't read The Seed Thief yet?
Buy your copy here:

► South Africa
► Rest of the World